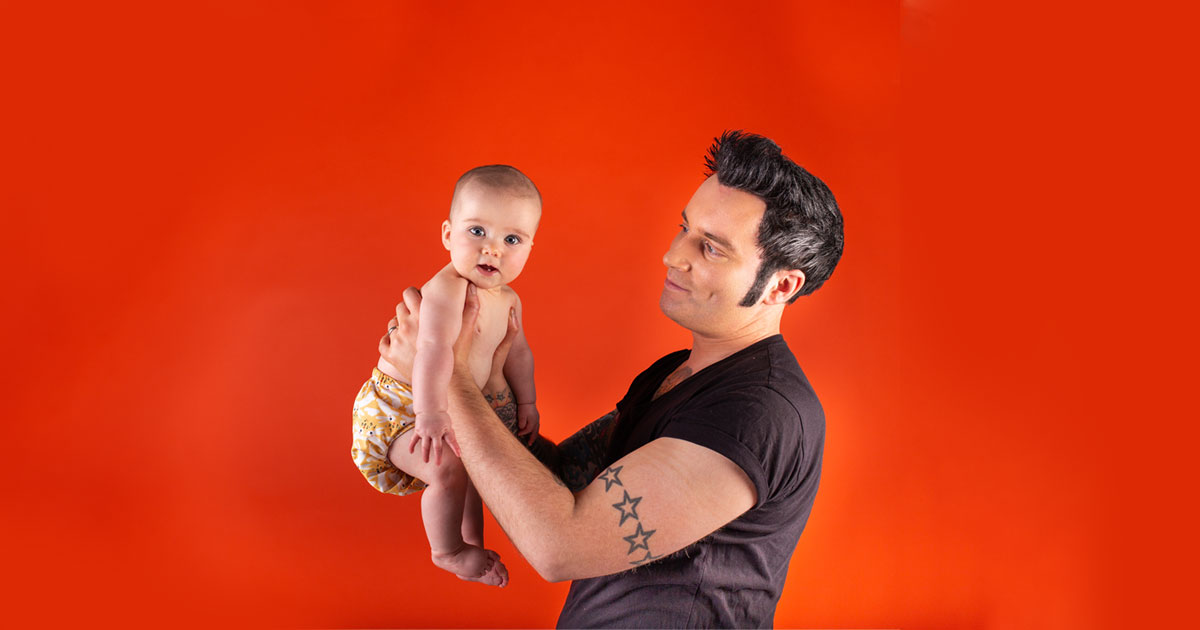 When you think about reusable nappies, most people assume it’s terry nappies and plastic pants, Andy and his wife Heather were no different. Heather told us they were both so surprised when they saw their first nappy,  “They were so different to what we imagined and very cute. We totally love all the prints.’  Once they realised there were no complicated origami folds or sharp pins, they were more open to researching the concept.

We asked Andy if he needed a lot of convincing about switching to reusable nappies in the beginning and he surprised us by saying that he didn't. With waste so much in the news and media, they were both into the idea of reducing their waste. But more than that, they were worried about comfort for their baby as eczema runs in the family so were fairly decided at the outset that they wanted to go with reusable nappies. “We went for comfort for Violet’s skin… her skin is so much better in cloth compared to when we used disposables”.  Our Oekotex 100 certification is your guarantee that the only thing that is on your babies bottom is soft, fluffy, absorbent, bamboo.

Andy first used reusable nappies when Violet was a couple of days old as they were gifted a birth to potty kit. “We were also given a big batch of newborn disposables so felt we had to use them. It totally confirmed for us that we wanted to stick with the reusable nappies as our wheelie bin was full of nappies every week and it wasn't very nice.”

We asked if they knew how many nappies they had diverted from landfill and worked out it was 1080 so far which equates to 171 kilos in waste reduction, not bad considering Violets only 6 months old.

So six months in Andy are you a nappy changing ninja,  *he laughed, I’m not a ninja but I am fast…. I have had to be as Violet is a really wriggly baby.” Andy loves the Hook and Loop fastening for that reason. “They go on and stay on, much better than disposables.”

We were surprised how much better they worked than disposables. We never get leaks. Would definitely recommend them, they are so much easier than we thought. We use the Easyfit for day and night and we never get any leaks at night-time either.

We asked Andy the key question (as it is one we get asked about most) "What about the Poo?" We laughed a bit as we talked about how everyone is a poo obsessed, especially before the baby comes.  Most people assume that the washing machine will be full of poo. They both agreed that before baby it is the thing that most parents are concerned about, but Andy his wife opted for disposable liners so they could lift them out, flush away the poo in the loo and throw away the liner. “When Violet arrived we didn’t even think about it. When it’s your baby it doesn't bother you, it’s no big deal.” As unimaginable as that may be especially for first-time parents, it is absolutely true.

Andy and his wife are currently using TotsBots EasyFits during the day and at night. We talked about them moving onto bamboozles at night-time once Violet was bigger and they are going to give them a go too.

Hopefully, Andy’s story has inspired you to consider using reusable nappies. Pop on over to our website and you can pick up a trial pack for half price. It contains an EasyFit all in one, a Bamboozle nappy, a Bamboozle pad and wrap so you give them a go before deciding which TotsBots reusable nappies are the best for you and your baby.

The many uses of our magnificent muslins