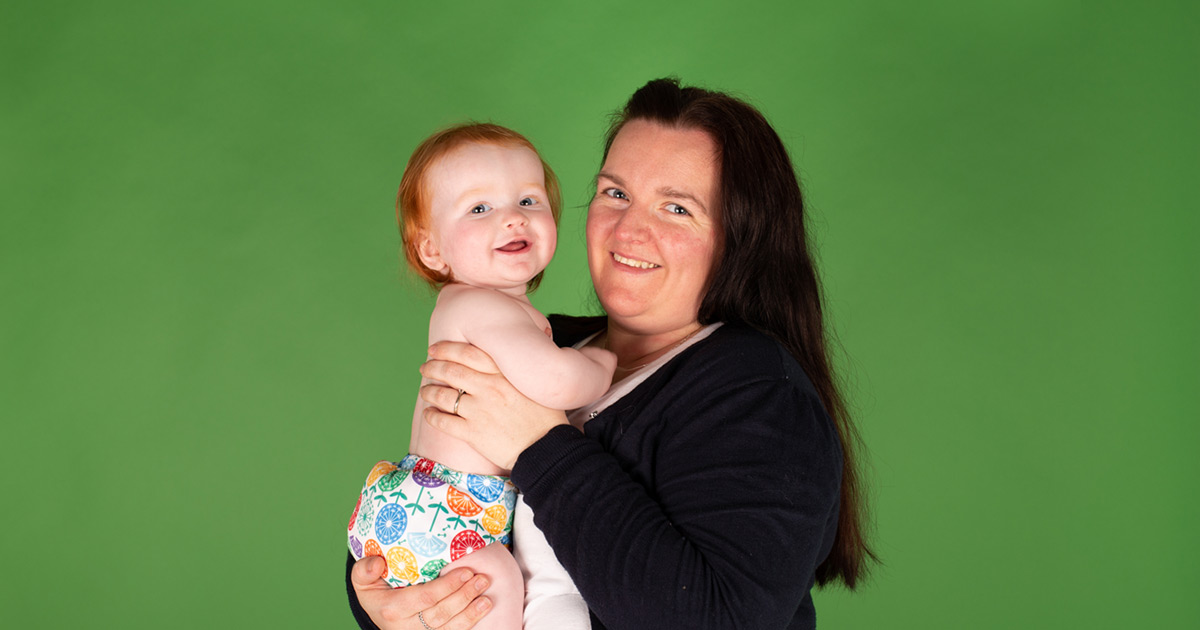 Ashleigh and Penny came to visit TotBots to see how their reusable nappies are made. Ashleigh studied sustainable development at University and had wanted to use reusable nappies with Penny’s older sister 5 years ago, but didn’t know anything about them and ended up giving up really quickly. Feeling conscious of the number of nappies they were throwing away Ashleigh was keen not to make the same choice for Penny and so did lot's of research into different reusable nappies until finally, she chose TotsBots.

How old was Penny when you made the switch?

I had bought some newborn Teenyfit reusable nappies and a trial kit, which we used from when Penny was about a week old, and in fact still, fit her today. The first week that she was in disposables her skin seemed really irritated but has been better now we are using reusable nappies.

The Trial Kit was great at getting to know the different types, but it wasn’t enough to use full time so I bought some pre-loved Bamboozles in a children’s charity shop and decided to give them a go at night-time.

So do you use reusable nappies full-time now?

Yes, after getting great results from the Bamboozle nighttime reusable nappies making the switch came easily. I was so confident having had no leaks during the night, we use them out and about and the nursery even uses them too.

How did the nursery react to using reusables over disposables?

When I first said that we used reusable nappies, they looked a bit horrified. I think they thought terry squares and safety pins! There probably needs to be a bit more awareness of them generally. I don’t know anyone else in ‘real-life' who uses them, all the parents I know I've come across online. It's frustrating that you can't just pick them up in many shops. Once the nursery saw them, they were more than happy to use them while Penny was there. She's been there for around 4 months now with no leaks or issues with changing.

Do you get many comments about using cloth nappies?

People ask a lot of questions. Usually, it's ‘what do you do with the poo?’. The washing seems daunting to a lot of people but once you get into a routine, it’s only an extra wash and you don’t even notice that. Penny has been on some sleepovers at my mums and my sisters and they originally asked if I would send her with disposables, but after using them once, they don’t find it any more hassle and she continues to go in her TotsBots. As long as they have the hook and loop fastening, it's pretty much the same as a disposable.

I love the patterns – who wouldn’t! But I also like that they’re so much softer and gentle against their skin compared to disposables.

Why did you go for TotsBots?

They're just so easy to use. No different from changing a disposable.

Also if you are a total convert already get in touch and let us know if you fancy being featured in one of our blogs. We’ll give you a little tour of the factory where you can see the nappies being made in action, you’ll meet the directors of TotsBots, plus you’ll get a little set of reusable nappies and a few pics from the day. Get in touch.

A day in the life of Reusable Nappies

A magic potion for reusable nappies