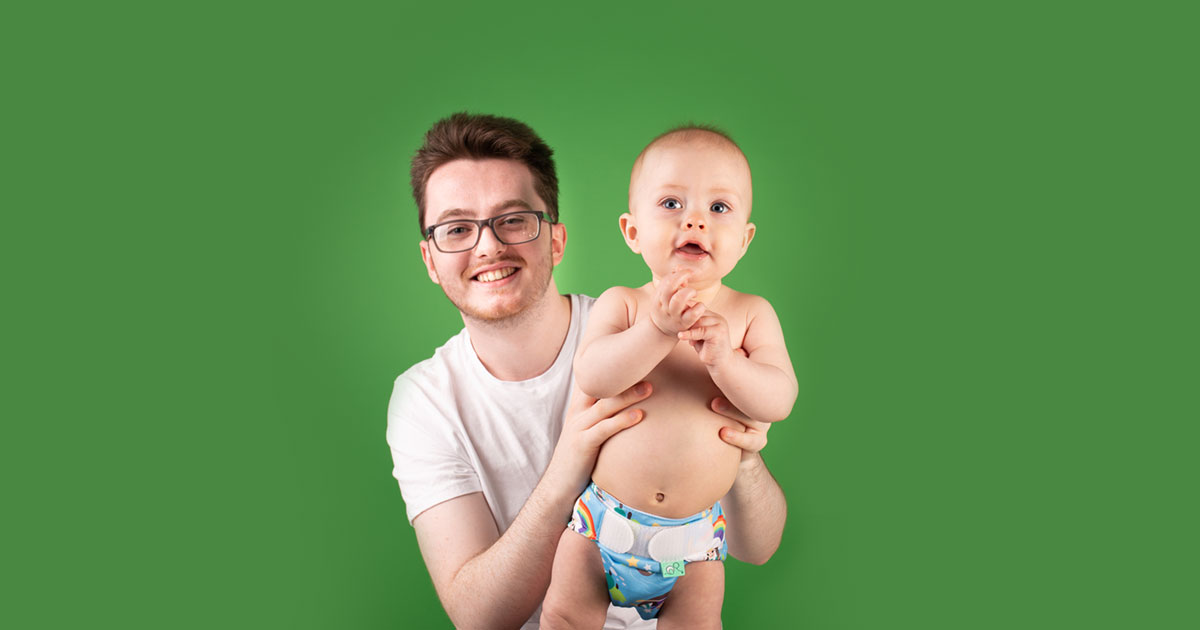 When we did a shout out for Dad’s using cloth nappies to share their stories with us, we were so happy and a little surprised when Jack appeared in our inbox. He’s 21, a full-time student, and at the time Shia was 20 week old bundle of smiles. (You might also recognise Shia as the poster baby for our recycled fabric)

It’s not often that Dad’s are in the spotlight for using reusables, but when Jack got in touch to share his story we were so delighted to see such a young Dad using TotsBots. Although it was Shannon, Jack’s partner, who first introduced the idea of using cloth nappies, once Jack knew all the awesome benefits, he quickly became a complete fluffy bum fan! Here’s their story.

Had you heard about cloth nappies before Shia was born?

I hadn’t heard of them before. It was Shannon who decided she wanted to use them, to be honest I thought it was a bit of a hippy thing. We went to a cloth nappy library meet to find out a bit more and the focus there was about fashion, but it was the practical and environmental reasons that were more important to us. I was pretty sold on the cost savings too.

What are your thoughts now you’re using them?

People can sometimes be put off by the start-up cost, what do you think?

It wasn’t going to stop us, we were happy to take the upfront cost because we knew we would be saving money in the long run. Shannon did a bit of a calculation to show the savings for us and I was sold on reusables from there.

How do you juggle the washing with being at uni full-time?

I don’t really find that we have to juggle washing as it just becomes part of the washing that we do.

What’s your top tip for dad’s who are reticent about the idea of cloth nappies?

Try it in the house and then work up to going full-time from there. Again, it’s a confidence thing, I think people think ‘what if I’m out and it leaks’, but we’ve found that we got more up the back poo disasters with disposables than with cloth nappies.

The fact that there are no chemicals in them. I’ve seen lots of horrible things out there around nappy rash and Shia hasn’t really had any. It’s sad to think that people are putting chemicals next to their baby’s skin by choice. I didn’t want to do that to Shia when there is an easy alternative. We were recently at a messy play baby group and all of the babies except Shia were wearing disposables. It felt like an old-fashioned thing to me seeing them all. I think cloth nappies are the future.

Jack’s cloth nappy journey started with Shannon’s influence, but now he wouldn’t choose anything else for his little one’s bum. They’re saving money and taking care of Shia’s sensitive skin without a second thought. With benefits beating disposables on all fronts they can go about their happy nappy days, carefree, knowing there won’t be any leaks or Poonami’s to stop the fun.

Take Jack’s advice and give cloth nappies a go yourself, just try one and see how you get on, you’ll soon realise you’ve got what it takes to use reusables on your baby too!

Making the switch to cloth nappies

Cloth nappies on the move