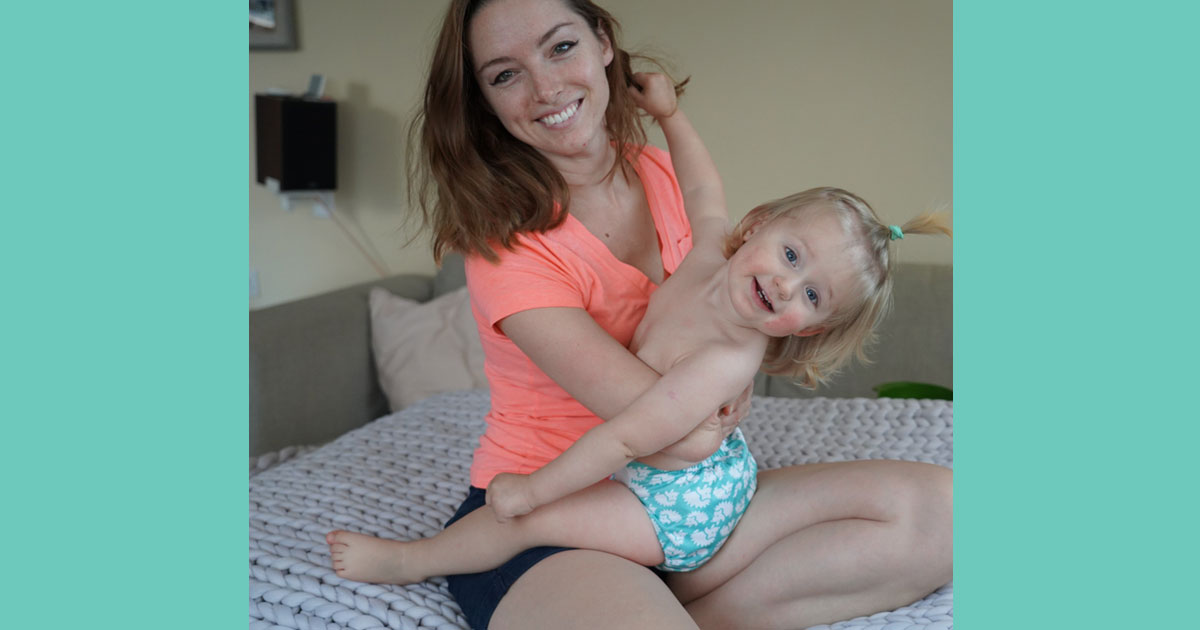 Elara’s mum Ashley (AKA @Orlandocyborgashley) was born with her right arm missing below the elbow. But this hasn’t stopped her from becoming a dancer, horse rider, model...or cloth nappy user.

When TotsBots director Fiona’s son was born with one arm, she struggled to come to terms with the difficulties he might face growing up. During those early years raising Kyle, Fiona was alone with her fears because she had no community to confide in. But today, thanks to social media, limb difference communities are flourishing. When Fiona saw @Orlandocyborgashley, a confident limb-difference mum using TotsBots cloth nappies on Instagram, she knew she had to get in touch. Below, Fiona share's her story alongside the heart-to-heart she had with Ashley.

There's always a bit of excitement when I'm scrolling through the cloth nappy hashtags and fab little movies of TotsBots nappies appear on my feed. But that excitement doubled when I saw that Ashley Young, a new mum with one arm, was teaching her 15k followers and other parents with limb differences how to change a TotsBots reusable nappy during Limb Difference Awareness Month.

As a parent of a child with a limb difference, (or limb deficiency as it used to be known when my boy was born), this video meant so much to me. Not just because my mission is to make easy-to-use cloth nappies, but because when Kyle was born with one arm, changing his child's nappy was one of the many things I assumed he wouldn't be able to do. That, and a million other things if I’m honest. The worst thing was thinking that he wouldn't be able to give me a proper hug… now he's older I realise how silly that one was but at the time the thought of it absolutely broke my heart.

Limb Difference Awareness Month is something we would have really benefitted from when he was born. In those days, you were given a leaflet about limb "deficiency" explaining “what it means for you and your child”...and that was it. No leaflet on how to deal with the constant stream of sympathy in the early days; a heartfelt hug, a pat on the arm or even just a look that would tip me over into tears at the drop of a baby hat. I used to dread the weigh-in clinic. I'd be biting my lip every time I undressed him in front of the other mums waiting for the silence to fall across the room at the sight of Kyle's little arm. And that was just the early days. What about dealing with the stares at the pool? What about starting school? The list was pretty long.

I was so moved by Ashley’s inspirational videos that I reached out to her to thank her for taking the time to raise awareness around people with limb differences. I remember very well the days of grieving having a “normal” baby, I silently ticked off all the things I thought my baby wouldn’t be able to do instead of focusing on what he would be able to do. I knew if videos like Ashley’s were around when I was a brand new mum to Kyle, they would have brought sunshine to the darker days. When I caught up with Ashley for this interview, she shared that her mum felt the same way I did when she was born. Ashley’s mum also wondered if her child would ever hold her own baby… and that broke her heart.

Ashley’s how-to videos prove that people with limb disabilities can hold their children, can change their nappies and can do almost everything a non-disabled person can do… it just takes a bit of figuring out. I’m so grateful Ashley took this time to chat with me about her cloth nappy journey and her experiences as a parent who is different from “the norm”. Here’s what we chatted about when we caught up…

Were you always interesting in trying reusable nappies?
We always wanted to use cloth because we’re a very eco-friendly family. Before Elara was born we looked up stats on disposable nappy waste and couldn’t believe how long they took to decompose — that’s when we found out that the cost of cloth was significantly less than disposables too.

We had reusable nappies on our wish-list and our family pitched in to buy us a TotsBots kit. Thanks to their contribution, we were able to use cloth nappies from day one and Elara is still using them now. We’ve only used disposables once when we were taking the plane to America. And that was our one and only blow out! Jargon buster: a blow out is a big poo explosion that practically reaches baby’s armpits!

What did you think when you first saw cloth nappies?
The first time we ever saw a cloth nappy was in an antenatal course. We immediately liked the EasyFit all-in-one cloth nappies. Since James and I both have one hand, that design made more sense for us. We looked at a lot of different nappies and liked TotsBots the most — we got on best with the design...plus the prints were cuter!

I remember worrying about my son, Kyle, not being able to hold his own baby one day. Were you scared about parenting with one arm?
When Elara was born, I was so fearful and stressed about holding her. When I was younger I was adamant that I never wanted kids… but I think that was because I was terrified of holding them. It’s definitely been a learning process and I’ve had to adapt and do it in my own way.

I used to find it especially stressful when other people were watching but after a while, everything became second nature and I learned what worked best for me and Elara.

Do you ever have any well-intentioned people offering to help? How do you deal with that?
Absolutely! I was changing Elara’s nappy in Costco once and a lady came in and put her hands in front of Elara’s body saying “let me help”. I declined and reassured her I had been doing this for seven months… but she insisted. By the time I managed to continue on my own, Elara had flipped over, her nappy was on the floor and poop was smeared all down her leg. The lady who caused it all just left the building and I started crying. I felt judged.

I first noticed you on Instagram when you made some great movies on cloth nappies. What compelled you to make them?
In April 2018, I made a series of movie clips for Limb Difference Awareness Month. I made a new video every day of me performing one-handed tasks to try and help others. When I was younger (and especially when I was pregnant) there were no resources for people with limb differences and I felt very alone in the world. I wanted to show other people how I do things with a limb difference.

After the first series, I made more videos while pregnant and now I make them throughout motherhood. Currently, there are almost zero resources out there for parents with limb differences and I want to change that.

Since making the videos, lots of people have reached out to me, like folks who had reduced mobility or limb differences. They were all really thankful and I’m so glad I’ve helped. View Ashley’s cloth nappy how-to video on Instagram.

Any surprises? Was using cloth nappies harder or easier than you expected?
Easier than expected! You can make a lot of excuses to not use them like not wanting to wash them or the nappies being too difficult to put together. But that’s simply not the case. They’re easy!

I expected they’d be worse than disposables, but that’s not the case either. I used to get some leaks now and then but not now that we use a bamboo booster pad. We use the two-part Bamboozle night nappies now too and we love them!

What’s your cloth nappy routine like?
We wash Elara’s nappies every other day and just keep them in a lidded bucket until wash day. We do a wash at 30-40 degrees about three times a week. It takes nothing to pop them in the machine then hang them up!

Do you have any advice for people who are hesitant to try cloth nappies?
Don't knock it until you try it and get a Trial Kit with a mix of different nappies to help make your decision. A lot of people are so concerned about filling their washing machine with poo, but that never happens. Just use the disposable liners and tip any poo in the toilet then drop the liner in the bin. Cloth nappies are pretty much poop-free when they go in the machine. We use SMOL detergent pods, always use a normal cycle and sometimes do an extra rinse if nappies are extra mucky… but that’s it!

What do you like best about TotsBots cloth nappies?
The nappies are super cute and they’re so much more fun than disposables. They hold a lot of the memories we have of Elara’s babyhood… and they hold a lot of poop too!

I just want to applaud Ashley again for giving up her own time to raise awareness of limb differences. Every day, she's proving that people with disabilities shouldn't be counted out. And from the personal perspective as a parent with a child who has a limb difference, I know first-hand how inspiring Ashley is and how her stigma-breaking videos help people who are struggling. Ashley's Instagram is an epicentre of self-love and confidence; give her a follow today to keep up with her, James and Elara's journey.

How to Use Reusable Nappies