Can you imagine a world without nappies? In some countries this is the reality. Modern reusable nappies are not that widely known but thanks to Suzi Robertson, there are now 329 Cambodian babies rocking some TotsBots fluff. Here’s the story how…

Suzi is a qualified primary school teacher and whilst volunteering at an NGO school teaching English in rural Cambodia she spent some time living with the School Director. It was during that time she noticed his daughter very rarely wore nappies and when she asked him why, he explained that in rural Cambodia the average wage is $40 a month, and with disposables costing $1 dollar a day, most babies go without. It was at that point she had a brainwave and decided she would try to source reusable nappies for the 30 local village babies. She gave us a shout to see if we could help. We asked her if she had a total in mind and she said she would take as many as we could spare. Suzi was expecting about 100 nappies from us but when 1862 TotsBots arrived on her parent’s doorstep, she was blown away! Suddenly she could help ten times the amount of families she was planning to.

Getting the nappies from Cambodian customs was not easy! Initially, she was told it would take 3 months to get the release forms signed by which time nearly $1000 in storage fees would have accrued!  It took 3 long, confusing days of visiting just about every customs department in Phnom Penh, tears of frustration and ultimately a trip to the British Embassy but eventually she got them. The forms were signed and the boxes were released!

Giving the nappies out turned into a major local event. Suzi organised workshops covering 9 villages in the Baribou district of Cambodia to demonstrate how the cloth nappies worked and how to put them on.  It was a mainly TotsBots Easyfits and reusable fleece liners that we donated. From the photos it looks like Suzi did an amazing job.

Our motto has always been ‘making the world a fluffier place to pee in’ and we are so grateful to Suzi for all her enthusiasm, hard work and efforts in spreading a little nappiness all the way to Cambodia. Thank you Suzi, you are a star x 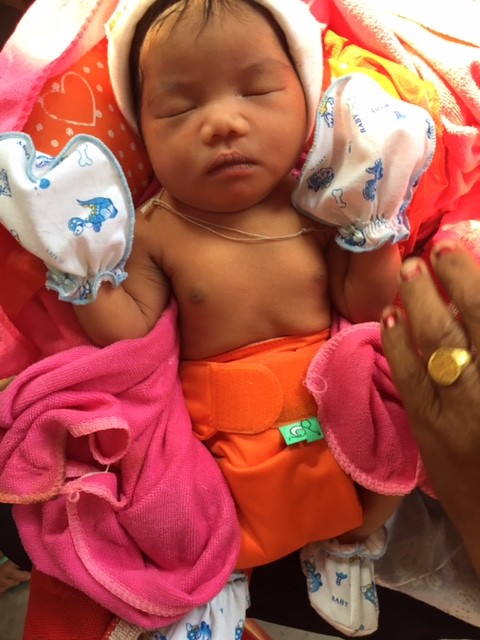