Becoming a cloth nappies Daddy with Chris and Eden 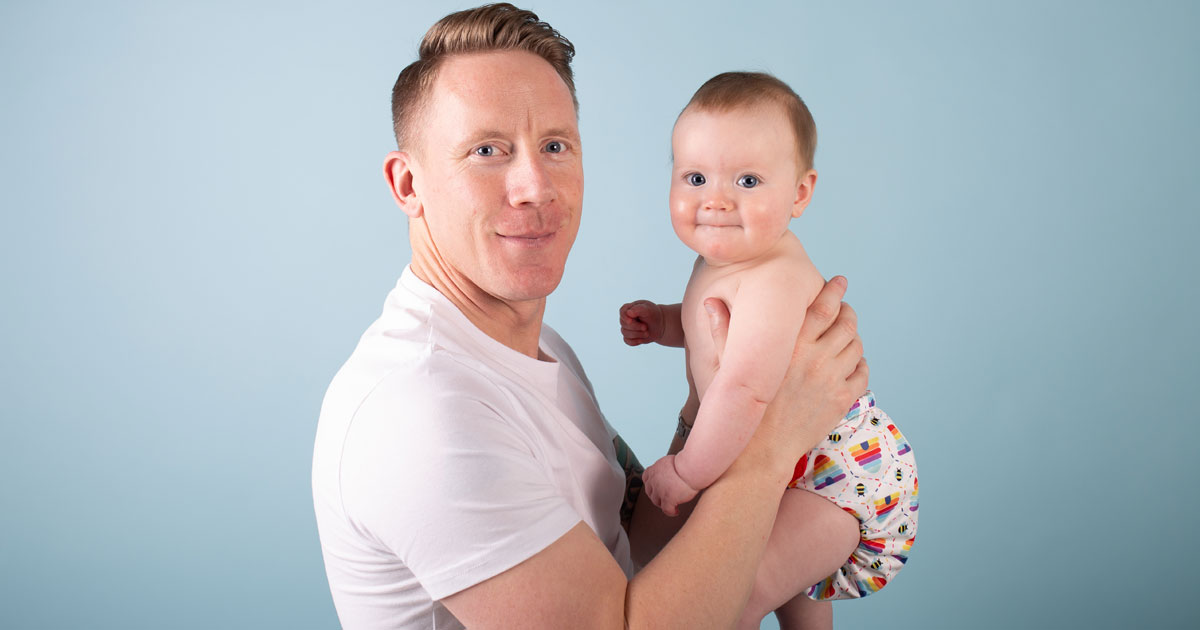 When we first met Chris and baby Eden at TotsBots HQ his passion for cloth nappies was clear, but his journey was a hesitant one at first.

You said that you were a bit sceptical about using cloth nappies – why?

Susan is keen to be as environmentally friendly as possible and suggested that we use cloth nappies. I just had visions of big white towels hanging on the line and trying to fasten nappies with safety pins. I guess I just thought disposables were easier as I didn’t know any different. I was a bit put off with the washing too and thought they wouldn’t be as clean as putting a disposable in the bin, but I soon realised that they weren’t messy at all. The liners were a big bonus – I didn’t realise it was so easy. Susan went ahead and bought them and they looked nothing like Terry squares, so I thought I’d give them a go and really happy that I did.

Gone are the days of folding endless giant terry squares, TotsBots cloth nappies are as quick to put on as a disposable! We dare you to do a time test.

What surprised you the most about cloth nappies?

I just about fell off my chair when I realised how much one nappy cost, though I thought about it a bit more logically and when you compare the cost of all the disposables that you go through, versus the one-off cost of the reusable nappies, it actually works out cheaper.

What made you change your mind about cloth nappies?

Having more knowledge about them made me realise that they weren’t more work than disposables, they were just an alternative. I wasn’t aware of the chemicals in disposables until I did some research. Eden has sensitive skin and had a reaction when we initially used disposables, whereas her skin has been clear since we moved to reusables. We just want the best for her, and they definitely seem kinder to her skin.

Will it be something that you advocate to other dads?

Yeah definitely – I’m happy to tell people how easy they are, I don't think a lot of people realise. It doesn't increase your washing as you're washing anyway and they're so much easier than the stereotypical terry squares. Not sure it's something the lads will want to chat about on the golf course but will spread the word where I can!

Switching to cloth nappies is guaranteeing you never run out of nappies ever again. As a new parent, this is one worry to cross off your list. Chris is a real Daddy using real nappies and it goes to show that all the nonsense you might associate with cloth nappies is untrue. Take the change test and switch to a nappy that will protect your baby, save you money and the planet from further stinky nappies going into landfill. Check out the range of TotsBots cloth nappies for day and night at our website shop now.

Myth busting: Babies, cloth nappies and ‘Sleeping through the night”

Getting to grips with 'All In One' reusable nappies

Making the switch to cloth nappies